Voting is open! Check out the 2012 nominees!

The nominations are up and voting is now open in the 2012 Edublog Awards! 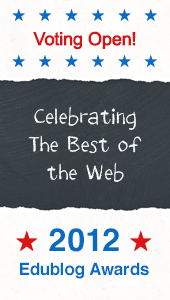 Voting is open until 11:59 PM US Eastern Standard Time on Sunday, December the 9th!

The winners will be announced at the Edublog Awards ceremony on the 12th at 7pm EST (more to come soon).

Use the links in the sidebar to see all of the finalists – those moved through to the voting round.

You can see all of the nominees in this google doc here.

Check the tabs at the bottom of the google doc to see all of the different categories. This will also show you how we ended up ranking all of the nominees.

Instead, our intrepid team of judges combed through hundreds of nominated sites to whittle them down to a manageable number of shortlisted finalists for each category.

Yes! We have badges for everyone who has been nominated 🙂

Just go to the Vote Here link  in the top navigation, choose the category you want to vote in, and then who you want to vote for!  Easy!  And best of all, once you have voteed, it loads a page where you can share your vote on Twitter or Facebook!